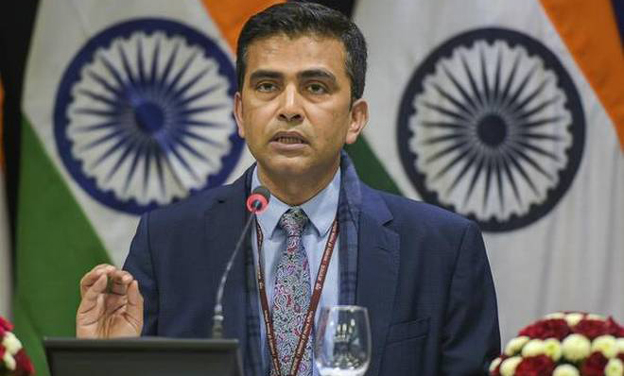 India on Thursday said the matters have moved on since the U.S. President Donald Trump while meeting Pakistani Prime Minister Imran Khan offered to mediate on Kashmir issue.

At the regular media briefing, official spokesperson of External Affairs Ministry Raveesh Kumar said that “things have moved on’ since remarks made by the American President.

Responding to queries, the spokesperson said that External Affairs Minister Dr S Jaishankar has already made a statement in both the Houses of Parliament and the US State Department has also issued a clarification.

The spokesperson said that India-US relations were perched on a strong footing with strong trade linkages and a strong strategic partnership.

“There are a plenty of things on the table. We have multi-faceted relations with the U.S. and there is a deep convergence between the two sides on several issues. India-US relations are broad based and it is important to see ties between India and the U.S. from a larger perspective,’’ he said.

The spokesperson said that in meetings between the U.S. Secretary of State and Pak Prime Ministers there was a reference to terrorism and counter-terrorism measures several times.

External Affairs Minister Dr Jaishankar, in similar statement in the Lok Sabha and the Rajya Sabha, had categorically assured that no request for mediation on Kashmir issue had been made by the Prime Minister to the U.S. President.

He also reiterated India’s consistent position that all outstanding issues with Pakistan are discussed only bilaterally.

“I would further underline that any engagement with Pakistan would require an end to cross border terrorism…the Shimla Agreement and the Lahore Declaration provide the basis to resolve all issues between India and Pakistan bilaterally. I hope in the view of my very specific and categorical responses that there is no confusion in the mind of anybody on this matter,’’ Dr. Jaishankar said.   (UNI)